Jewish Languages of Brooklyn: A Fieldtrip

The fieldtrip was a huge success! Some 30 people of many ages and backgrounds came along for Juhuri dancing, singing in Judeo-Arabic, out-of-this-world baklava, and even a look at an extraordinary collection of antiquarian books in lesser-known Jewish languages. We even got a write-up (in Yiddish) in the Yiddish Forward! 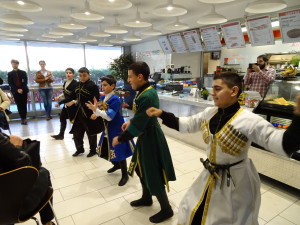 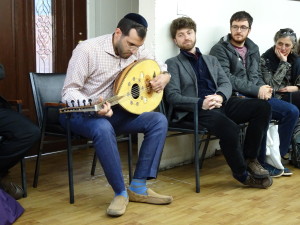 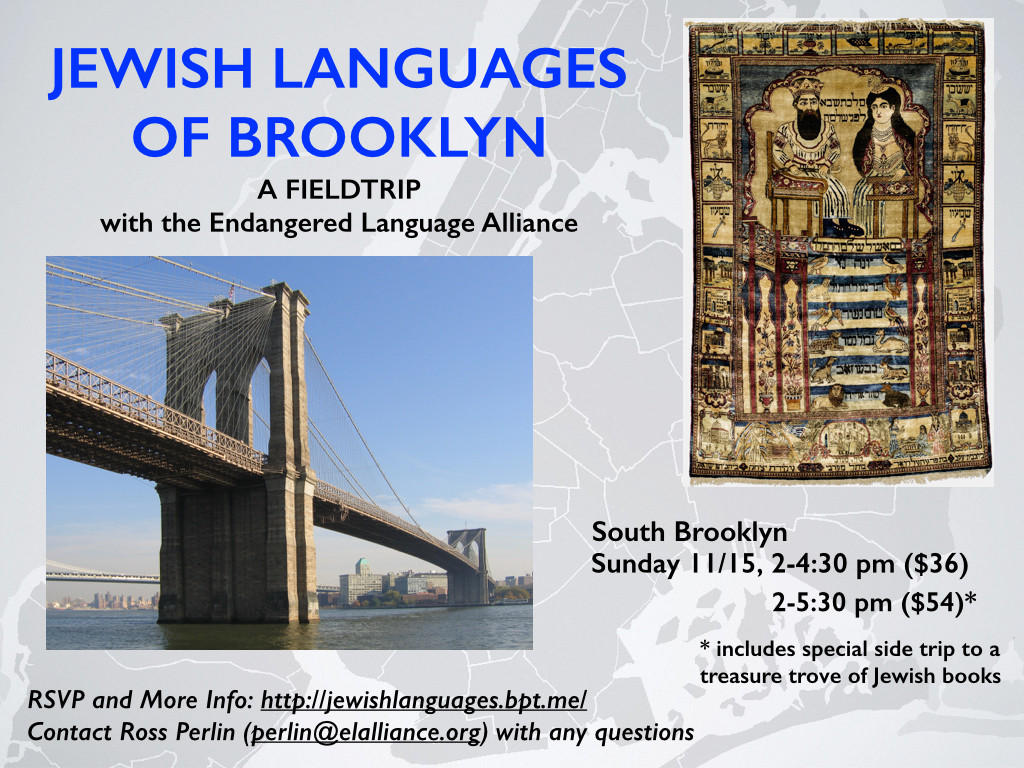 This is a small group tour and tickets are very limited. Reserve yours at https://jewishlanguages.bpt.me.

Brooklyn is a global center for vanishing Jewish linguistic diversity.

On Sunday afternoon November 15, from 2 to 5:30 pm, this first-ever Endangered Language Alliance fieldtrip will explore one of the most culturally and linguistically diverse Jewish places in the world, a side of Jewish New York that most people never see.

We’ll visit the heart of the tight-knit Syrian Jewish community; learn about a unique Jewish dance tradition from Azerbaijan; hear the singing of a cantor who carries on classical Judeo-Arabic musical traditions; and sample delicacies at a famous Syrian Jewish bakery. As a special additional side trip, we’ll be guided by a self-taught bibliophile through his unique treasure trove of Jewish books, with a focus on deep Jewish diversity. In the process we’ll hear examples of Jewish languages from Morocco, Tunisia, Syria, the Caucasus, and elsewhere.

Today, with few exceptions, the remaining longstanding Jewish languages are severely endangered. The goal of the Jewish Languages Project, run by the non-profit Endangered Language Alliance, is to document and celebrate those languages. This fieldtrip, a pilot project, helps supports that work.

The fieldtrip will involve some walking and standing. We’ll visit several locations in South Brooklyn within walking distance of each other, maximum 15 minutes between stops. For those interested, the special side trip will involve a 10 minute ride by public bus.

DIRECTIONS:
We’ll meet at the cafe at the entrance to the Sephardic Community Center at 1901 Ocean Parkway. The nearest subway stop is the F train stop at Kings Highway, about 10 minutes away on foot, or the Q train stop at Avenue U, about 15 minutes away. Allow an hour of travel time from Midtown Manhattan.