Hawaiian and Quechua Classes at ELA!

A new introductory Hawaiian class, starting this Thursday night, June 9 and continuing every Thursday night in June from 6:30 pm to 8:30 pm!

ʻO ke alelo ka hoeuli. The tongue is the steering paddle of the words uttered by the mouth. In celebration of Hōkūleʻa’s World Wide Voyage named “Mālama Honua,” Ka Leo Nūioka and launching its new introductory Hawaiian language course, taught by Kainoa Embernate — and ELA is proud to be hosting it.

Hawaiian, the indigenous language of Hawaiʻi, is linked historically to languages across the Pacific and the Indian Ocean, from Madagascar to Easter Island. The language is actively being revived by thousands of speakers.

ELA frequently helps organize and host inexpensive classes in languages that are rarely, if ever, taught. All classes are taught by native speakers now living in New York and are aimed at beginners. Students typically include both members of the community seeking to revitalize the language and others who are simply interested in learning a fascinating language. 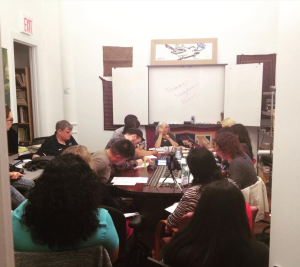